Welcome to the first ever ALL ABOUT THE SPONSORS BLOG HOP!  These kind members of the RAVE REVIEWS BOOK CLUB (RRBC) donated their support during the 2017 conference, in the way of gift card and Kindle e-book donations for our Gift Basket Raffle. They supported us and now we are showing our support of them by pushing their book(s).
We ask that you pick up a copy of the title listed and after reading it, leave a review.  There are several books on tour today, so please visit the HOP’S main page to follow along.
Also, for every comment that you leave along this tour, including on the HOP’S main page, your name will be entered into a drawing for an Amazon gift card to be awarded at the end of the tour!

​
Blurb:
It’s April of 1917, and World War I has reached Elizabeth’s family on their wheat farm in North Dakota. Although the battles are being fought overseas, the war has affected her in ways she couldn’t have imagined. Elizabeth is thrust into a new role after her brother and father leave the farm to do their part in the war. And she’s only eleven years old!
Having almost died as a toddler, Elizabeth has been babied most of her life. Now she must learn to help out around the farm; cooking, cleaning, and tending to the garden and livestock. No longer can she run from her responsibilities, as she did when her horse Rosie was giving birth. There were complications during the delivery, and Elizabeth panicked and froze. The foal didn’t make it.
Elizabeth faces her biggest challenge yet as a huge Christmas Eve snowstorm rages outside, cutting her family off from any help; and her mother is about to have a baby! Her brother and sister are laid up with chicken pox. Does Elizabeth face her fears or run from them? Can she help her family, who need her more now than ever? Or will she retreat like she did when Rosie needed her?

This blog hop sponsored by:  4WillsPublishing

Greetings, readers! Today I am excited to introduce to you author Flossie Benton Rogers. Flossie is the March 2018 RRBC Spotlight Author, and a master of dark fantasy romance. Take it away, Flossie… 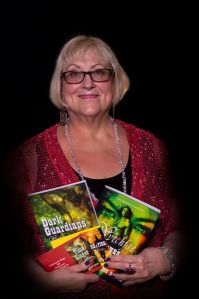 Mystical Beings in the Wytchfae Series

The mystical beings in the Wytchfae series are usually loosely based on mythology, although they tend to develop their own interesting traits and sometimes morph into very different creatures.

Cat Sith – A dangerous fairy cat with mesmerizing eyes, can transform into a woman.
Elemental Horses – steeds composed of water, air, earth, or fire. Epona of Mind Your Goddess has a water horse.
Epona – Goddess of fruitfulness and horses and the only Celtic goddess worshiped by Roman soldiers.
Familiar – A witch’s guardian fairy spirit that often takes animal form.
Fates or Norns – Three sisters who control destiny. One spins the thread of life, one measures, and one cuts.
Firefae – tiny supernatural beings that light the way in the night for the goddess Epona.
Grims – Souls of the unfortunate dead that have regressed to demon level.
Helle – Goddess of the Underworld.
Lamia – Creature with the upper body of a woman and lower body of a snake.
Shadow People – Beings from another dimension that appear as shades, sometimes sinister duplicates of ourselves or someone we know.
Skadi – Norse giantess and goddess of winter and the hunt, and in the Wytchfae world, a sorceress.
Succubus – Beings devoted to the goddess Lilith who invade and manipulate the dreams of men.
Wytchfae – A term I coined for a human with witchy skills and a drop of ancient fae blood.

Get your copy of Mind Your Goddess HERE