While all of Mississippi bakes in the scorching summer of 1925, sudden orphanhood wraps its icy embrace around Emily Ann “Baby” Teegarten, a pretty young teen.

Taken in by an aunt bent on ridding herself of this unexpected burden, Baby Teegarten plots her escape using the only means at her disposal: a voice that brings church ladies to righteous tears, and makes both angels and devils take notice. “I’m going to New York City to sing jazz,” she brags to anybody who’ll listen. But the Big Apple–well, it’s an awful long way from that dry patch of earth she’d always called home.

So when the smoky stages of New Orleans speakeasies give a whistle, offering all sorts of shortcuts, Emily Ann soon learns it’s the whorehouses and opium dens that can sidetrack a girl and dim a spotlight…and knowing the wrong people can snuff it out. 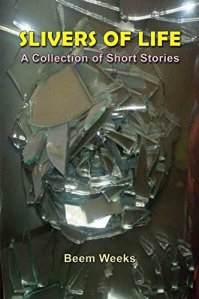 These twenty short stories are a peek into individual lives caught up in spectacular moments in time. Children, teens, mothers, and the elderly each have stories to share. Readers witness tragedy and fulfillment, love and hate, loss and renewal. Historical events become backdrops in the lives of ordinary people, those souls forgotten with the passage of time. Beem Weeks tackles diverse issues running the gamut from Alzheimer’s disease to civil rights, abandonment to abuse, from young love to the death of a child. Long-hidden secrets and notions of revenge unfold at the promptings of rich and realistic characters; plot lines often lead readers into strange and dark corners. Within Slivers of Life, Weeks proves that everybody has a story to tell-and no two are ever exactly alike.

If you ever find yourself on the Strange Hwy—don’t turn around. Don’t panic. Just. Keep. Going. You never know what you’ll find.
You’ll see magic at the fingertips of an autistic young man,
•A teen girl’s afternoon, lifetime of loss.
•A winged man, an angel? Demon—?
•Mother’s recognition, peace to daughter.
•Danny’s death, stifled secrets.
•Black man’s music, guitar transforms boy.
•Dead brother, open confession.
•First love, supernatural?—family becomes whole!
You can exit the Strange Hwy, and come back any time you want.
See, now you know the way in, don’t be a stranger.

Jacob Radner returns to his suburban Chicago roots to bury his departed father. The family is all there—except for older brother Kevin. Thirty-seven years earlier, Kevin Radner walked out the front door and vanished. Will this prodigal son return and finally make peace with the ghost of his mobster father? As the patriarch’s body is lowered into the earth, long-hidden family secrets become uncovered: a former girlfriend, a child born out of wedlock and adopted out, a mother willfully blind to the sins of the father. In this novella, author Beem Weeks examines the notion that sometimes those closest to us are the very ones we should fear most.