Cheers and welcome to this Cover Reveal Celebration of Multigenre Author Y. Correa’s next installment to the Earth 8-8-2 Saga.

The first book, “Earth 8-8-2: The Genesis Project” marked the commencement of a Sci-Fi Mashup of epic proportion. 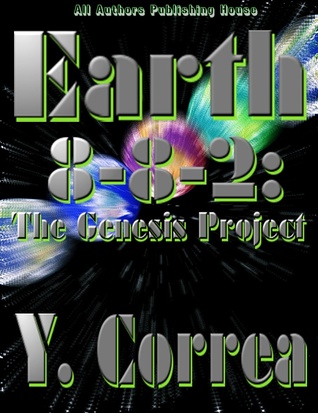 Could Science Serve as Salvation?

For Dr. Scott, the combined strengths of each life form represent the answer to the onslaught of malice and tyranny plaguing his Earth. When his creation—Genesis—begins developing, the lines between scientist and father become blurred. Soon the time approaches where Genesis is expected to fulfill her purpose. Does she go along willingly, or will her rapid evolution obliterate everyone’s best laid plans?

In the newest installment, “Earth 8-8-2: Genesis’ Rebellion” Author Y. Correa endeavors to start where the last one ended and continue the adventure that is the Earth 8-8-2 Saga.

What happens when Science’s Instrument of Salvation blazes her own path?

In the second installment of the Earth 8-8-2 saga, Genesis is heartbroken, disillusioned, but most of all … angry: angry that she has no say-so in the narrative of her own purpose.  In the absence of choice, the only response that makes sense is rebellion.

As Genesis elicits the intensity of her powers, General Townsen must act quickly to develop a counterbalance to this previous experiment gone askew. Will the General’s army rise effectively against this unlikely nemesis, or will all see the literal overtures of what occurs when powers that be attempt to regulate true evolution?

Now, without further ado, we are pleased to present you with the cover of “Earth 8-8-2: Genesis’ Rebellion”.