I am excited to share with you amazing readers this month’s Rave Reviews Book Club Spotlight Author, the talented Kathryn R. Biel.

Take it away, Kathryn…

Declan McLoughlin is the dashing hero of Jump, Jive, and Wail. Here are five things you may or may not know about Declan:

Here’s an excerpt from my new novel, Jump, Jive, and Wail. This is told from Declan’s perspective:

I head toward the shops, prepared to kill a little time. Then, I see her—the woman I ran into. She’s sitting in a chair by the water feature. She looks hypnotized by it. Propelled by a desire to be near her again, I veer toward her. Her hand is in her light brown hair, absently twisting away. She’s crying. That’s not good. I should abort this mission and walk away. But something in her face looks so lonely and vulnerable, and I can’t resist.

I sit down and start talking at her. That’s my strategy whenever a woman cries. I just talk at her until I distract her from what’s really bothering her. It may or may not be the reason why I haven’t had a relationship in a while. Natalya is the big reason, of course, but I may be lacking in the interpersonal skills as well. I ramble on. “Sorry for running into you back there. I really am. I’m not usually very clumsy. Not at all. I don’t even know why I was hurrying so much. I knew my flight was going to be delayed. Is yours delayed also?”

She’s not listening, I can tell. I don’t know why I’m even bothering, other than the fact that she has a look about her like a lost puppy or something. Regardless, I keep talking. That’s the one thing I can do. I can talk a blue streak. It gets on Nat’s nerves. Sometimes I talk just to annoy her. This girl is certainly not Nat, but I keep talking anyway. “Yeah, the last thing I want to be doing is flying right now. I’m so burnt out with traveling. I just want to stay home in my own bed. How about you? Do you like to travel? Where are you headed anyway?”

There’s no response, so I’m about to get up and walk away when she actually responds. I repeat my question and am strangely pleased that we are going to the same destination. Why? What is it about her? Certainly not her personality. She’s a bit abrasive. I don’t need more abrasive. I’ve already got that in spades with Natalya.

Okay, the small talk is not quite as difficult as pulling teeth, but almost. She just looks so sad and alone. I notice that her brown eyes are a bit almond shaped and her skin is a milky white. It looks smooth and creamy and I think about how her hips felt underneath my hands. I wonder if her skin is that creamy all over. 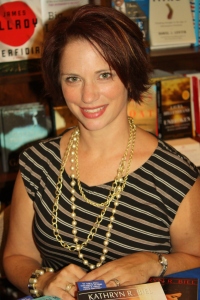 Author Bio:
Telling stories of resilient women, Kathryn Biel hails from upstate New York and is a spouse and mother of two wonderful and energetic kids. In between being Chief Home Officer and Director of Child Development of the Biel household, she works as a school-based physical therapist. She attended Boston University and received her Doctorate in Physical Therapy from The Sage Colleges. After years of writing countless letters of medical necessity for wheelchairs, finding increasingly creative ways to encourage the government and insurance companies to fund her clients’ needs, and writing entertaining annual Christmas letters, she decided to take a shot at writing the kind of novel that she likes to read. Her musings and rants can be found on her personal blog, Biel Blather. She is the author of Good Intentions (2013), Hold Her Down (2014), I’m Still Here (2014), Jump, Jive, and Wail (2015), and the short story, Fly Robin Fly (Part of Cupid on the Loose!: A Valentine’s Anthology of Short Stories, 2015).