Greetings, readers! Today, I am introducing you to Larry Landgraf, author of Tales from the Riverside, The Four Seasons Series, and many other great books. Larry writes in both fiction and non-fiction genres. So, without further ado, here’s Larry. . .

Larry Landgraf is a rough and tough swamp dweller who lives along the middle Texas Gulf Coast. In seventy years, he has moved two miles to the other end of the same property. He can be found barefoot most of the time. Larry has nearly died so many times, he’s lost count. You’ll find some of the death-defying stories in Tales from the Riverside.

Larry is the father of three grown children who have given him eight grandchildren. Larry divorced in 2008 and brought his new love, Ellen, to the swamp to live in 2016. He teaches her the ways of the swamp while she teaches him more than he ever imagined. For an in depth view into Larry’s life, you won’t want to miss his videos:

Larry is on his third career. After college, he began his commercial fishing profession. When that played out, he started his own general contracting business. After a serious on-the-job injury, he turned to writing. He currently has ten very unique, award-winning books on Amazon including four screenplays. Many have said his Four Seasons Series books would make great movies so he took it upon himself to write a screenplay for each. He is optimistic one or more will be made into movies. A Tempest in Texas, based on Into Autumn (book 1 of the series) made finalist in the New York Screenwriting Festival. 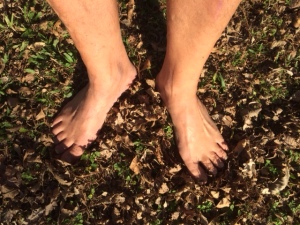 Tales from the Riverside

“Not only does Mr. Landgraf write about the dangers of the swamp, but also shows us its unique beauty.”

“The stories are delivered without pretensions or artifice, exactly as you might hear them from Landgraf’s very lips should you visit.”

“I felt like I was sitting on Mr. Landgraf’s back porch enjoying a conversation filled with his wit and wisdom.”

Four Seasons Series – Into Autumn, Into Spring, Into Winter, and Into Summer

“I recommend this series for those who enjoy an end of world scenarios, romance, family, survival skills and human nature.”

“I was eager to begin reading “Into Spring” having read and enjoyed the first book in this series so much. There are times when the next book in a series can let me down. This is NOT one of those times.”

“Rarely has the first and second book of a new series been so enjoyable, riveting and compelling as Into Autumn and Into Spring.”

“The book was rude at times, but I guess that is what it takes to make people change.”

“A genial, enjoyable and insightful work by a quite terrific writer.”

“If your feelings get hurt easily or you can’t handle the truth very well then do yourself a favor and read the book anyway, it ain’t going to hurt.” 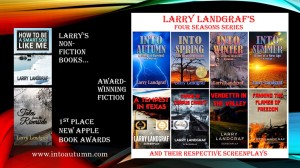 You can find all of Larry’s books on Amazon here:

20 thoughts on “Getting to Know Author Larry Landgraf! @riverrmann”