Andrew Boyd is a student of poetry, blogging, and story telling. Andrew became a self-published author on February 27, 2013. He is one who is honest to where he made people mad, yet they respect and respected what he had, have, and has to say.

A two-time kidney transplant recipient, Andrew is one who looks at the world in a way that gives and gave him perspective as to how his life would be shaped due to his medical experiences, as well as helping others by exuding inspiration and compassion to those around him.

He is a graduate of the Class of 1996 from Germantown-Lankenau Motivational Program Annex, where his writing prowess was born in the 10th Grade, and continued on while attending Arcadia University in 1996. After a writing hiatus in 1997, a trip to New York City in March 2010 reignited his passion for writing. While posting several of his writings on social media outlets, he also performs and performed spoken word poetry in the Philadelphia and New York areas. He is currently performing on Black Poetry Cafe’s (BPC) internet radio show “FEVER FRIDAYS”. 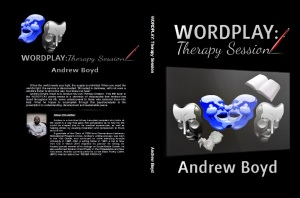 When the world needs your light, the supply is unlimited. When you need the world’s light, the service is disconnected. Shrouded in darkness, with not even a candle’s flicker to show the way, how does one heal?

Andrew Boyd’s result is to conduct his own Therapy Session. This fifth book in the WORDPLAY poetry series is a chronicle of crepuscules that Andrew has faced throughout his life, some unbeknownst to those who believed knew him best. What he hopes to accomplish through this psychoanalysis is the prescription to understanding, development and sustainable peace.

Sitting on the floor in front of a crowd,
My legs are crossed Indian Style,
Elbows on the knees.
Head bowed down and temperament apparent,
My microphone will melt with what I will say.

Hate is a strong word: never to be taken lightly.
There are many who do not use the word when
Expressing the feelings they have for others.

I Hate how they lie to innocent parties.
I Hate that they rage on another.
I Hate how they do not hold themselves accountable
As they break the heart of their mother.

I Hate how people turned their backs to me.
I Hate that they feel they are seen as priority one.
I Hate that patience to them is a waste of time
Yet they look to me to jump the gun.

I Hate how people say that they are by my side,
Yet their actions speak louder than their words.
I Hate the fact that they lied to me that way
To the point where I show them my flock of birds.

I Hate that I trust some people early:
I Hate that part about myself.
There should be many people walking with shirts
That read “Trusting me is bad for your health.”

I Hate this life that I live:
I can only blame myself.
I Hate that I placed myself in these situations:
I Hate that I cannot see my worth and wealth.

To acknowledge that I Hate myself
Tells me personally that I see more than I care to see.
I need to stop hating the reflection in my mirror,
If I am to change things around and about me.

*Special Thanks to Monica F. Brown and Yasmin Correa for helping me with all things “WORDPLAY: Therapy Session”, from the inside of the covers to the cover itself*

6 thoughts on “A New Release From Andrew Boyd”