Since studying Milton’s Samson Agonistes at school this has always been my favourite quote:

“All is best, though we oft doubt, what the unsearchable dispose, of highest wisdom brings about.”

So if you get knocked down by life it’s for a reason and will ultimately be for the best!

Having been made redundant 18 months ago and approaching 60 years of age, I decided the time must finally be right to fulfil a lifelong ambition to write a thriller and get it published. So I turned my back on the corporate world and a good income in order to produce my first thriller Revenge. I had no illusions I would become an overnight sensation as an author but writing Revenge and subsequently my second thriller Encryption, has made me a far happier man, despite the dramatic reduction in income. I feel happier inside than for a long time and so I guess writing has been good for my soul!

The point of this blog is to remind everyone in a job that has overtaken their life that while material things and your finances are important so is nurturing your soul. And to quote many before me, it is never too late to change direction and you should never give up on your dreams. You can’t change the past but you can alter the future. As we all know, if you carry on doing the same thing you will get the same result. I decided rather belatedly to stop what I was doing and try to have some success as an author. I actually consider I have already been successful just by publishing my books and knowing they are being enjoyed by complete strangers.

I understand that I was more fortunate than many in being able to stop working as I have a supportive partner with an income. Life is definitely financially tougher but I am still happier!

I will finish with a famous quote by Lucille ball, which sums up my feelings:

Bill has recently retired from the corporate world and has finally fulfilled his lifelong ambition to become an author. He has written two thrillers, Revenge and Encryption, with the expectation of many more to follow.
Bill lives in Brighton, UK with his German partner and has seven daughters, a son, two horses, a dog and two cats!

Encryption can be purchased at most online retailers including: 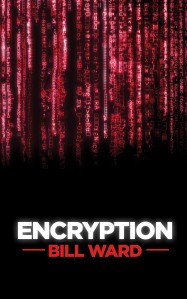 In a small software engineering company in England, a game changing algorithm for encrypting data has been invented, which will have far reaching consequences for the fight against terrorism. The Security Services of the UK, USA and China all want to control the new software.
The Financial Director has been murdered and his widow turns to her brother-in-law to help discover the truth. But he soon finds himself framed for his brother’s murder.
When the full force of government is brought to bear on one family, they seem to face impossible odds. Is it an abuse of power or does the end justify the means?
Only one man can find the answers but he is being hunted by the same people he once called friends and colleagues.